When to call it quits ? 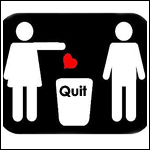 We have all experienced the best and the worst a relationship can offer. At some point in time, we as individuals, make a decision to leave such a commitment or strengthen it by becoming more intimate. Each relationship has two sides and both sides need to establish the same value on the commitment. If one side overwhelms or falters on their obligation to the relationship a flux is created in the balance.

So when should we as an individual call it quits in a relationship? If you are the one still committed and the other is ready to break it off, how do we determine whether to fight for the relationship that once existed? Personally, I find it very easy to let it all go. Rash, dramatic, absolute decisions are made by only those who don’t know what they want in the first place and if the decision is to discontinue the relationship, we at least know there is a level of uncertainty with all that has been said throughout the relationship up to that point. This uncertainty should be a precursor to allowing an individual to accept a broken relationship.

Most of you know that I am an advocate of fate, destiny, personal happiness and romanticism. This allows me to see past the complacency and routine of a broken relationship. If I or another individual see it fit at any point to call off a commitment, and this decision is not abrupt in anyway, then there is no point in fighting for something that does not exist. Unfortunately, most breakups don’t go this easy and people’s values of fate, love, destiny and personal happiness are transcribed with service, time, money, and selfishness. These vices make up the recipe of a horrible breakup.

Complying with the notion of escape from emotional and physical commitment, I have listed below a few signals that tell individuals who don’t know when to call it quits, to quit:

This list is obviously very basic, but for some, it goes without consideration. I know of many relationships where all of these signals have been presented and hope is still grasped. My question to people who hold on to hope after all of these signs is; what do you plan on salvaging? Nothing would ever be the same; acts of hate can not be reversed, all your pictures are gone and it would be hard to forgive any frolicking that commenced during the period of the detachment. The relationship is now destroyed from the vantage point of both the dumper and the dumpee and it is time to call it quits.

People need to stop wasting their lives in emotional strife. It is unhealthy to live your days knowing that the unknown is known. Move on and spare your life and the life of the person you think you can win back. Chances are if you couldn’t solidify your relationship in the time that you were allotted, then the relationship was not based on love and happiness. Trust in truth. If you wonder whether your relationship will work, then it probably won’t work. It is only those relationships where wonder is answered with truth that love has a chance to work under complete trust.

“You can have anything you want if you give up the belief you can’t have it” – Dr. Robert Anthony