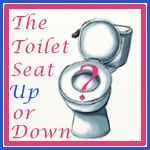 The last bastion of gender (in)equality doesn’t pertain to professional obstacles, access to health care, education attainment or political participation, but rather confines itself to a 15x18x19 inch white ceramic/porcelain cylindrical bowl containing approximately 1.6 gallons of water and a dual mode plastic seat that is manually opened and closed. On one hand, we have a movement in our society that pleads to the powers at be stating women are ‘absolutely’ capable of being on the front lines of any battlefield, promoting the idea women are just as capable as men in all areas and occupations. On the other hand, women can’t put a toilet seat down.

Men have the dual responsibility to put the seat up and down, so both states are in their proper position when at rest as the man approaches the toilet in the bathroom. Men can handle any bathroom situation. Oh look, I need to poop and the toilet seat is up! No worries, I will just put it down. Look there, the toilet seat is down and I need to pee! I guess I better put the seat up. Women only ‘need’ the seat down, yet women put zero effort in lifting the toilet seat up for their man. How is this equality? How is this companionship? The argument that the toilet seat looks better with the lid down is bullshit. No one looks at a toilet as decoration. Whether the lid is up or down, the toilet is still a place to poop and pee, and nothing changes that. I will even go as far to say it is safer approaching a toilet with the lid open because you can see what is in it (snakes, spiders, bugs and bigger snakes). No one is sitting down without first checking what they are sitting on and in the case of the toilet, what is in it. So why do women give this simple and logical situation such a hard time? Power.

The power play used in reference to the toilet seat is one of the last traditional relationship ties held on by women in a relationship. Today, women expect men to help with cooking and cleaning and laundry, and rightfully so. We are all equal in terms of work and survival. But if men are ‘sharing’ the duties traditional women performed, (and vice versa) then putting the toilet seat down, which falls under the domain of the traditional housewife and traditional manners, should be voided.  It is no longer a woman’s house. It is a human house.  If men and women share equality, then the household and the toilet seat should be a part of that equality too. I propose the following clause to the book of ethics and manners:

May God see this right, witnessed by United States of America and everything that is good in the world…

I bind this new modern tradition to law. Amen.