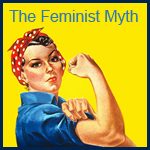 Any movement, group or organization which sets itself apart from the whole, to better their position within the whole without credit, merit or accomplishment is bad. Feminism is just one of many movements within the American society which doesn’t promote equality, but rather revenge, extortion and advancement beyond equality…

Where it once stood as a beacon of equal rights, equal opportunity and equal disposition, feminism has now become the poster board for abortion activists, man haters, and female militant villainy.

The task of (old) feminism has been completed. Now young girls can grow up to become anything their male counterparts have traditionally been. Equality. Except now some women want more. They want the ability to claim that their gender is the reason why they are paid inadequately, they want to scream that there is constant attack on the right to their own bodies, and they whine they aren’t promoted fairly. Yet, men are still required to pay child support and give their livelihood unto the women they marry based on tradition. Yet, these women want the government to pay for birth control and tampons and these women want the right to abort a fetus at the final hour.

Sorry you can’t have it both ways. Either you are equal or you are not.

All of this, and we haven’t even touched on the myth of Feminism. The myth that the women a part of this movement are more empowered as construction workers and police officers, than what their ancestors were before them: mothers.

We have demonized the most important occupation of all, motherhood. Female soldiers, firefighters, police officers, business women, lawyers and construction workers. Golf Clap.

Just because we can, doesn’t mean we should.

Now don’t get me wrong, there are many talented women in this world in a variety of fields. This rant isn’t meant to demean any accomplishment from the female gender, but rather understand the myth behind feminism in reference to subjugating motherhood.

The most empowering female profession of all is motherhood. There is no debate in this. Giving life is the ultimate power. But, the myth of feminism would have you believe that taking a position a male would hold is more powerful. And that is just crap. For the longest time, women controlled the outcomes of human life. They had a hand in producing the greatest minds, talents, athletes and heroes (both male and female) the world has ever seen. As a man, there is no reward I can imagine more fulfilling than creating and guiding another human being to greatness and there is no other closer to a child, to an adolescent, than a mother. None.

We have generations of females who are caught between profession and maternal instincts. All because of a movement which started out with great intentions of giving females in society an equal voice that has now turned into creating a society of confused and bitter middle aged women along with an army of young females who believe it is their province to avoid anything maternal or traditional.

You can’t have it all. You just can’t.

Sure, you can grow up to be anything you want. That is the great thing about this country and its quest for egalitarianism. But as a society we should uphold motherhood as one of the highest sacrifices a human can make for another. That’s empowerment. That’s real feminism.

Don’t get caught up in the myth or the chance to make a real impact on the world and a ‘life’ might pass you by.