Taking Creativity from Behind 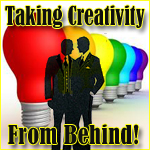 There is, of course, a famous stereotype about swishy gay men in design, fashion, film, music, and many other creative endeavors.  And, unbeknownst to mainstream America, many people in those industries are out to their local communities, but not to the world at-large.  For the record, I support them in whatever lifestyle they choose, no matter what my religion may, or may not, say about it.  This is not an article about “those gays who run Hollywood.”  Many of those gays are my best friends.

This post is about a simple observation.  Some people believe that gay men and women (but especially gay men) are more inclined to creative thinking than their straight counterparts.  I think the odds are good that this is true.  However, there is another factor that many people fail to consider as to why gay people are, per capita, more likely to succeed in creative endeavors.

Here’s the line of logic:

I’m not saying “gays don’t have kids.”  Obviously that would be a ridiculous statement.  Many gay couples adopt.  Others use surrogates or donors.  And they can make fantastic parents.  I’m saying that, on average, many gay people are comfortable with the idea of not having their own children.  This makes their threshold for financial risk far, far higher.  And in the long run, that risk threshold (the willingness to go broke a few times if needed) is a DECISIVE advantage in all speculative industries.