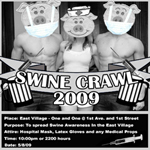 In the midst of a “recession,” a “war on terror,” various “political scandals,” and the threat of “nationalized banks” our media has completed this chain by announcing the rebirth of the “swine flu.” There is nothing funny about people losing their jobs, death and suffering, but I couldn’t help myself in planning something fun around yet another media created illness; as if SARS, bird flu, anthrax and mad cow weren’t failure enough to produce real scare. Here in NYC, many schools have shut down because of the “swine flu” or the H1N1 virus. There have been over 800 people diagnosed with this virus, so in the grander scene of a planet with 7 billion people, and thousands of viruses yet to be categorized,  why all the hype if outwardly and inwardly this acts like a normal flu? Well, I am not here to answer that question, but I am here to tell you that the media has no business inciting fear in the public in reference to biological diseases and I am also here to tell you that Swine Crawl 2009 was completely awesome!

Following in the footsteps of most things ridiculous such as the Snuggie Crawl, Lingerie Crawl,  and Super Hero Crawl the idea of the Swine Crawl manifested itself through a drunken weekday outing in Midtown NYC. Flipping on the local news channels here in NYC, you can see isolated instances of people wearing latex gloves and hospitals masks for protection against the swine flu. My friends and I thought it would be a great idea to converge on the Lower East Side (LES) with a group of twenty or more people dressed in latex gloves and hospital masks and raid various bars that were oblivious to our plan. The rules were simple, participants had to at least wear latex gloves and have a hospital mask on them, pay for drinks in cash, and have fun. We had people who attended pay in cash for the simple reason at any given time, the organizers of the Swine Crawl would display a fake sneeze or cough, thus resulting in everyone downing their drinks and rushing out of the bar. It was a great time, a great concept and people loved us. I encourage any promoter to steal this idea and organized something like this in their city before the media finds something else not as catchy as the “Swine Flu” to scare us with.

Probably one of the funniest things to come from the Swine Crawl other than the faces of the people out in the Lower East Side was my personal preparation for it. Unfortunately I had to work long hours the day of the Swine Crawl. Knowing my work schedule days before the Swine Crawl event, I decided to take a trip to Duane Reade to purchase Swine Crawl props. It was a gorgeous day and I arrived at Duane Reade mid afternoon. The store was surprisingly busy for the time of day, but it was located next to a subway, so logically it would have a high frequency of people. Prior to arriving at Duane Reade, I had come from the gym, so I was sporting a tank-top, gym shorts and sun glasses, not usually out of the ordinary, but when you are 6’5” 285 lbs, people kind of notice.

However, on this day at Duane Reade, people didn’t notice my size. After grabbing a box of Latex gloves, a box of hospital masks, a box of condoms, and a Dr Pepper I set the items down on the counter without even giving what I was about to  purchase a second thought. I may not have given what I purchased a second thought, but the young girl at the counter and the line of young girls behind me did. Mortified, the girl behind the counter was not only blushing, but was fumbling at checking out the four items I had set down. Calling her out, I whispered loud enough so a few of the girls in line could hear me and told her, “It is everything you are thinking, but much, much more,” and I ended my statement with a wink. The girl next in line behind me heard this and started laughing. She was a very attractive girl, with dark hair and a great smile, but what attracted me even more was her comeback to what I just whispered. She peeks over my shoulder, looks at the girl behind the register, then looks up at me and says, “So, what is the Dr. Pepper for?” Having all of this transpire within seconds, I was overwhelmed that this complete stranger had the capacity to be so bold and so witty with such a short notice. The girl at the register finally gave me my total, I left Duane Reade with 5 girls blushing in line, one girl blushing behind the counter and one sexy, witty girl’s phone number.