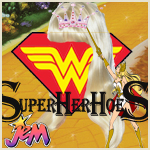 To truly accept something/someone, you must first understand where they came from or, more importantly, identify what things from the past had more influence than other things. Traditional variables include parents, teachers, relatives, peers, culture and religion. These variables undisputedly affect us all. However, if you were born in the 70’s or later, you were exposed to much more than the powers listed above. Unfortunately, most of our parents had to occupy us by sitting us in front of a television screen so they can accomplish adult tasks. The drawback to this is that, what appears to be an innocent and harmless television show is really a medium for instilling morals and values which may not be constructive. We as adults usually view a show as pure entertainment, but our children see it as a template for guidance.

As a male child, I was bombarded with awe-inspiring heroes and role models from history, movies, cartoons, and sports. I would say that 99% of all protagonists are male, which gave me a plethora of positive characteristics to inherit. The caveat to this is that 99% of all antagonists are usually male too, so if trying to destroy the world appealed to you, you now have tutelage.

What interests me more than the wide spectrum of heroes and villains created specifically for male youth, is the truly narrow gamut of female heroes and villains. I feel sorry for the childhoods of my female counterparts. As I continually meet women, I realize that most of them share in the same negative characteristics; characteristics which males do not possess. I thought that maybe there was something that these women were/were not exposed to while growing up that engendered them this way. I began to recall all the female superheroes and childhood stories which would affect women in the present. I also began to realize that the stories and characteristics that these heroines represented, were not made to introduce young girls to womanly traits, but rather, create an imbecilic female race unable to identify with their male counterparts. Here are some of the female icons I pulled from memory and their true idiosyncrasies.

Wonder Woman: Unimpressive. Why do we need another invincible super hero just to check off the gender box?  From her invisible jet to her obnoxious attire, I see nothing but a stuck up, insecure woman who follows superman around and causes him more trouble than she is worth.

Barbie: Did we really need to objectify pretentious, superficial bitches? Thank you Mattel for deeming it ok to reproduce plastic models of everything we wish not to find in women. Expensive sports cars, tall blonde and to beautiful, little girls are sure to become uninhibited from Barbie’s lifestyle.

Alice: Why isn’t it just ok to be normal and traditional? Alice and her wonderland showed us that being a floozy knows no bounds, literally. I wish that every time I strayed from what is proper, what is right, that I find a rabbit hole with so much more to offer.

She-Ra: Hey let’s appeal to young girls by making a warrior princess of power similar to the way He-Man appealed to young boys! Hey let’s make a huge fucking dike who surrounds herself with females to solve all the world’s problems!

Dorothy: Why wasn’t Dorothy Blonde? From the beginning, Dorothy looked and sounded like a complete dumbass. The Wizard of Oz should have given the scarecrow a penis and Dorothy the brain. I don’t know who did more senseless yapping, Toto or Dorothy.

Cinderella: What was that? Too good to scrub floors? Let’s outsource some magic to perform a makeover on you, in order to win over a wifeless prince! If she was truly beautiful, the prince would have noticed her without the horse-drawn pumpkin, glass shoes, crown and couture dress!

Smurfette: What did Smurfette give to the other Smurfs that can’t be insinuated after the thirty minute cartoon was over? Absolutely nothing (Read: Smurf Sex).  Her only job was to infiltrate the other Smurfs to cause jealousy and competition. She failed at that, but at least she wasn’t walking around the village with a mirror.  That was Gay Smurf… another topic altogether.

Jem: Two personalities?  Seriously?!  Girls have enough trouble as it is figuring out one person inside their head, much less two or more. How about we show our youth that world peace is achieved by obtaining a female corporate job during the day and rocking-it-out on stage at night?!

Sure, I was very laconic establishing each female icon with her negative attributes, but you get the picture. To assume that Children do not read into what I described is exorbitant. There are good morals to take from each story, but since females do not have the dichotomy of universal protagonist/antagonist exposure, they also absorb abrogating traits around these female icons such as Barbie’s materialistic nature, Dorothy’s fatuity, and Alice’s eagerness to explore beyond what is normal. Ladies, it is not your fault. This is just one rationalization as to why these characteristics have come to be; surely the Internet, reality TV, social networking,  Glamour Magazine and MTV are better reasons as to why the traditional woman is being abolished…