Sometimes, you have to make war to make love 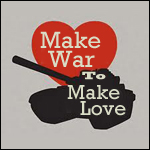 Ladies, we know you hate war and love peace. You talk about it all the time, in both macro-scale and micro-scale. A week doesn’t go by where I don’t hear a woman (or a man who might as well be a woman) say something on the theme of ‘There’s no such thing as a good war or a bad peace’.

Disclaimer: I don’t think war or any kind of taking of life should ever be entered into lightly. It’s a big f***in deal. However, ladies, you need to understand that war, and bar fights, and most other kinds of conflict exist because of you.

Whaaaaat? That’s crazy, Ben! How can it exist because of us if all we do is talk shit about it all day long? It’s simple. You like to travel. All of you do. This isn’t up for debate. You want to experience life to the fullest. Unfortunately, that costs money. Every war ever fought was over money, or land, which comes to the same thing. Bar fights are usually over turf or a woman, and turf is really only necessary because of money and courting/mating prospects.

So, the next time you go out with that exciting dude, understand that he is what he is because he’s able to defend what he has against those who would take it. A good man may not relish making war, but neither will he flee from it.