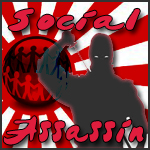 It all starts with infiltration.  Never has the phrase “keep your friends close, but your enemies closer” rang truer to a person, than to a social assassin.  A social assassin is someone who attempts to damage a person or a group of people by destroying their social credibility, personal lives, and/or professional lives.  There are countless scenarios that we have all witnessed or experienced which include coworkers sabotaging each other to get ahead in their company, exes trying to damage current relationships, and the smearing of a person or group of people who may have a different point of view.  No matter the scenario, social assassins utilize relationships with their target, or the social networks of their target, too carry out their master plan.  A social assassin’s motives are simple; jealousy and/or revenge, or any derivatives of these, are the primary reasons a social assassin will strike.  Social assassins utilize four techniques which have been used throughout the centuries by assassins all over the world.  Each technique offers the social assassin different levels of identity security which plays a huge role in continuing relationships with the target(s) and the target’s social networks.  Here are the four techniques:

Suicide Bomb (Mass Destruction): Fucking boom!  That’s right, fucking boom!  If you are going to take someone down you might as well take everyone down, including yourself.  The suicide bomb technique is not the cleanest, most cunning way to take down a target, but it certainly accomplishes the mission.  In this desperate act of unimaginative annihilation to destroy the target’s credibility, the social assassin reveals all secrets, players, traitors, truths, falsities, rumors, predictions, and the identity of other social assassins of the target and the target’s social network; bringing down everyone involved, no matter the intentions.  This mass destruction technique puts everyone in question and destroys the target and their entire friend circle, which is almost unrecoverable for anyone involved.  Destroying everyone’s credibility, and making people question their trust bonds all over the social network, is a great way to take down a target and make recovering their social network almost impossible.

Social assassins either succeed or fail.  Their success or failure depends on how close they are to you, how much information you give to them, how close they are to your social network, and how credible they are (or making people believe how credible they are) to everyone involved.  If someone wants to cause harm to you socially, it will come from within your social network.  Why do people decided to become social assassins and target someone in their social network for assassination?  As stated before, a social assassin’s motives will always stem from some sort of jealousy or revenge.  We live in an age of instant communication, gigantic social media networks, and search engines that record your every move (literally), award, punishment, success and failure.  What once was private to most is now displayed publicly or semi-privately for all to see.  Secrets are quickly ousted by technology and communication.  Never has the environment been more conducive for a social assassin to succeed than now. We must investigate who poisons our reputations and use the facts of our deeds as the cure. We must disarm people with the truth who would stab us in the back. We must dodge and counter snipers from a distance with the accuracy of achievement. We must wear a shield of honor to protect us against suicide bombers.