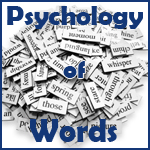 We are defined by language. Every thought that runs through our minds, every feeling that is conjured by the life around us is fundamentally shaped by our language. One cannot think or reason without the use of language and if you don’t believe this, I challenge you to try to think without using words (It is impossible). The thoughts in your head are words and phrases from the languages you know. Without language, we are made up of only instinct and reactions to our environment. To complicate things more, each of us has a different understanding of the world around us because each word we have learned (hermeneutics) for a color, or a feeling, or an element of life is different from another person’s experience with the “same” color or feeling or element of life. This introspective directly relates with a term called “Qualia” or an individual’s subjective conscious experience. Basically, Qualia is the acknowledgement that when I see the color green, it may be different than the color green you see based on the biology between us and the first experience each of us have with the color green. Another example is the taste of something. When two people drink wine, does the taste differentiate based on the language(s) they know, their ability to describe what they taste and the biology of their taste buds? The answer to this question is the premise to the deeper question(s) we are going to explore; does our use of language affect the relationships we have with one another and our individual perception?

It is human nature to try to relate with one another and to be a part of a whole. We strive to identify with other humans. In today’s world, our culture (especially in America) aims to break humans down to the very DNA we are made of as a justification of our behavior, and an explanation of why we cannot possibly identify with another person. This jargon has produced generations of humans who are abandoned by the whole of society, despite the advancements of technology, which has made it easier for us to communicate. We are raised to think we are not good enough as we are and if we “change” things about us, we might become “better”. And when we fail at that “change,” or that “change” does not produce the desired results, words and phrases are tacked on to our individuality in order to produce an explanation as to why we didn’t morph into what society considers the “better” version. For example: Instead of “Johnny doesn’t like History class” it is now “Johnny has ADD, and suffers from X, Y, and Z which are the reasons he doesn’t like history class.” But if Johnny takes this drug and that drug, he will sit and listen like he is “supposed to.” Instead of just accepting that Johnny doesn’t like history class, society forces Johnny to acknowledge new labels (produced by language) which now describe him, and forces him to continue down a path of self-worthlessness, believing that there is something fundamentally wrong with him compared to the rest of his human peers. It wasn’t that long ago when these negative identifiers didn’t exist in our country or in our language. Even today, they still don’t exist in other cultures and languages. So when the Johnny’s around the world don’t like something and don’t pay attention, those cultures deal with the problem of Johnny not paying attention, instead of coming up with new words to subjugate Johnny and reinventing who Johnny is. When society breaks down individuals using words, the words begin to break the individuals.

“There is a name for that,” is a phrase commonly used in our culture. Instead of understanding what “something” is, we would rather invent a word that legitimizes the existence of that “something.” Our society has become a word producing machine. Instead of using language to communicate ideas and expressions, we are using it to redefine us. We have stopped dealing with our problems rather we are defining them and accepting the new versions of who we are which include the problem. When we have a problem that cannot be identified by a word or phrase, we solve the problem by trying to define it instead of reevaluating our actions. When we have a problem that can be identified by a word or phrase, we accept it as part of us, since our language is a part of us. Once we understand that when we label someone as (insert negative attribute here) and they believe they are (insert negative attribute here) based on that label, they will inherit, unintentionally, the entire definition of the word, even though what they may be going through is not equal to (insert negative attribute here) at all. But once they believe they are something, they will become what they believe.

Language is a powerful tool. It can be used to try to communicate the taste of wine to another who is drinking from the same bottle, and it can be used to change who we fundamentally are based on what society tells us. Either scenario, we must understand that another person’s definitions of life will not be the same as our own, yet it is human nature to try to express those experiences to one another. We should always wish to learn from others experiences and compare them to our own, but never should we accept someone else’s version of reality or think their reality is more perfect than our own. Life is experience. Language is communicating that experience. Don’t be trapped in society’s version of life and language.