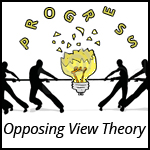 Opposing View Theory: When two or more opposite, conflicting and/or alternative ideas set themselves against a ‘subjective’ or ‘abstract’ (and sometimes objective) problem, puzzle and/or conflict which prevents any outcome, solution and/or progress to be obtained. The inability to advance. Digression.

Usually, having two or more points of view increases efficiency and outcomes. Usually, there are reasonable people who weigh each point of view proposed against the problem and either decide to execute one of the suggested points or use a combination of each point, formulating the best possible solution for the said problem.

There are no more reasonable people.

Today, opposing views stifle progression. The advancement of technologies and the sensationalism of social media have created a world in which ZERO facts are ingested. Every view point proposed is in direct opposition of another. There is no incentive to come to a solution, only debunking another point of view. Unreasonable people gravitate toward any point of view they have been coerced or brainwashed to believe without any critical analysis of other points of view. This predisposed gravitation toward favoritism of information or misinformation is termed selective exposure and is the premise of the opposing view theory.

Selective exposure states that individuals favor information which reinforces their pre-existing views while avoiding contradictory information. Simply put, no matter what facts, solutions, or proposals considered for a problem, they are disregarded because of the unwillingness to change.

Today, selective exposure has reached its critical effect. Every social media post, every breaking news headline, every idea is criticized not to promote an effective solution, but to propagate a paradox, and unconsciously, but willingly prolong the solvable. No one comes across the aisle and when they do, there is so much opposition to fact and reason; efforts are lost in a sea of emotion and lewd comments, usually attacking the very motive of seeking solutions. From politics to history, activism to popular theorizing, people have become so unreasonable that there is no way to determine fact or fiction because people’s desires to oppose one another outweighs people’s desire to seek the truth or solution.

The opposing view theory enables people have an unfettered desire to be in flux or conflict. People want to play the victim, the martyr and want to participate in a continuing resolution, rather than a solution. There was a time when people owned their deeds, their points of views and backed them relentlessly with fact until a better point was made. People must formulate their principles on fact and experience. People must be reasonable again. Reason relies on truth. Progress relies on reason. We must live to progress.