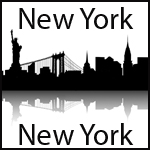 As I stare out of the oversized window of my New York City studio apartment, gazing out at a vibrant, fantastical and energized civilization, it has finally hit me, I have changed. And not a change associated with monotony and persistence of time; real change.  On the eve of my departure from the “world’s capital” after a decade, I have evolved from a close-minded juvenile to someone humbled with a tiny bit of understanding of this crazed world.

I have seen so many come and go. Some staying longer than others, some still there. You get what you put into New York City. Did I mention it is unconditional? New York City will suck your life and your time as if the Empire State building is the nucleus of some earthly black hole. However in place of the years and decades passing by at an accelerated rate compared to the rest of the world, New York City gives you: existence, purpose, memories and experiences beyond comprehension. It is this unconditional, symbiotic and equal relationship New York City offers to us and I fell head over heels for it.

Watching the sunrise in the city is just as exciting as a sunset. Mostly because you can be doing the exact same thing when both occur. The energy surges through you, if you allow it. When you give in, you become a part of a living entity. 24/7 food, service, entertainment, culture, trends, fashion, movements, sports, law, finance all existing in one of the most breathtaking topographies in the entire world. From Yankee World Series seats, to courtside at MSG, concerts and concierge, late nights at The Box and The Slipper Room, business lunches at the Harvard Club to happy hours at The Union League Club, dancing outdoors at the Lincoln center, to dancing indoors in SoHo. Food? Everywhere! The diviest of dive bars will rival food from most city’s Zagat top ten. Picnics in Central Park, bonfires in the Hamptons.  David Letterman, SNL, Colbert, Daily Show, Fallon, and The View, to Fox and Friends and Good Morning America! Converting liberals and converting conservatives to New Yorkers daily. While the rest of the world pines over celebrities, New Yorkers are disinterested. Famous Athletes? Who cares! World Leaders and influential figures? Screw them. We are a breed of people who not only know we are better than you, but also better than them. Better not because of inalienable rights or ingrained human equality, but because any person who has lived in this city knows the career and accomplishments they have achieved trump the rest of the worlds, tenfold.

In love, out of love, back in love: love. Every place on earth has the potential to harness love, but not every place on the earth will make you question it. New York City isn’t made for the emotionally weak, or the unsure. The connections you foster everyday will cast doubt on romanticism because every time you meet someone, there is always someone better, younger, smarter, richer, more beautiful/handsome who can offer you an entirely different set of experiences and networks. Love is real in New York City. Really real. An Affair to Remember real. It will test every vow, commitment, promise and oath and when the smoke clears, if you end up with a person who has taken this Empire City Baptism with you, well… That’s real fucking love forged in the fires of New York City. Only to be broken from the fires of New York City. Real Fucking Love.

The #1 question I have received lately is if I will miss New York City. My answer: Hell no. The food is too expensive, rent and housing too high, and just doing simple things are a hassle. And because New York City is inside of me, in my personality, in my memories and in any future decisions or interactions I will have, there is nothing to miss. I am a part of something where I went all in and got back everything. And even though I will be physically someplace else, I will mentally and spiritually always and forever, be in New York City.

It has been the greatest experience of my life.

The people who I have met, the relationships we have forged will be unrivaled. No matter where I am in my life or in this universe, New York City, NY will always be home to me and just as I left, I expect to slide right back into it without recognition or parade to be a part of it unconditionally again one day – to do my part in making it the greatest place in the world.

Thank you New York City and to every soul I have encountered while residing there.