How to Keep Your Man 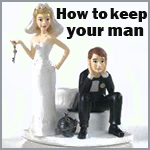 Girls suck….And that is the first way to keep a man; and I am not talking about being atrocious human beings either.  This isn’t an article on how to get a man.  Most women are experts in the outward superficiality conjured up in obtaining what they want.  This article aims to explain to all of you (women) that once you get beyond the propensity of courting (The get-a-man phase), keeping a man is very simple.  And it is that simplicity that is either lost or forgotten or unknown or ignored by women which ultimately convinces a man to look elsewhere.  Here is how you can better your chances in keeping the man you have “sucked” in.

Alluding to the “Girls Suck” comment, the first and foremost precursor to keeping a man is pleasure.  Pleasure (Attraction) is why you got your man in the first place.  Somewhere down the line, your man thought you were hot enough to talk to, sexy enough to date, beautiful enough to sleep with, and magnificent enough to call his own.  And somewhere down the line, women have become more and more complacent in returning the pleasure gesture as the relationship progresses.  We have all been in new relationships where sex is not only awesome and undiscovered, but it is also frequent.  It is sometimes hard to keep passion in the relationship, but pleasure (sex) should always exist and it is usually the woman in the relationship who pulls back and limits the once every day, twice a day occurrence to something along the lines of once or twice a week, not during your favorite reality show, only on the weekend, but not before 8pm or after 11pm.  Don’t make your man work for sex.  Pleasuring your man, “draining” him of the will to seek out other women sexually because of his fulfillment at home, is the first step in keeping your man.

Believe it or not, the simple act of feeding your man will help you keep him.  Knowing and embracing your gender role within a relationship is very important.  If you expect your man to treat you like a princess, lift heavy things, and do “guy” stuff in your life, you are expected to return the favor.  Here is a secret ladies, one of the first things a man will brag about to other men is his woman’s ability to cook and take care of him.  There are very few things sexier than a put together woman who knows her way around the kitchen.  Having a meal prepared and a drink ready relaxes a man.  It reminds him where home is located.  On those “guys night out” when his eyes might be wandering, it is the home you provide that will make you overcome any youthful hussy who doesn’t know what pre-heating the oven is.  And nothing will pre-heat your “oven” faster than cooking for your man.

There is an explorer in every man.  Exploration doesn’t have to reflect the conquistadors who traveled thousands of miles to discover new lands, pillage established civilizations, and convert the indigenous female population to household slaves, but rather simply experiencing new things.  Although most men seem set in their ways, when the girl they love suggests an adventure, it is not only a gesture of love and commitment, but also a huge turn on.  Here is a hint ladies: every guys wants a badass girl and doing badass things will make your man want you.  A man wants a woman who is “currently” adventurous too.  If you are one of those girls who spent their load of adventure backpacking through Europe after high school, you better have some left for your man.  Tales of your past adventures will easily get you a man, but sharing future adventures with him will allow you to keep him.

I sometimes feel that women think going absolutely bat shit crazy is a turn on to guys.  It happens so frequently, that is must be the only answer, right?  Control your emotions.  Men can’t relate to your illogical, totally emotional take on a situation, so why compound it with crazy hand gestures, screaming, throwing projectiles, rash decisions and threats?  Men want passion and adventure, but not at the expense of their lives and sanity.  If a man falls for you, make sure that what you present to get him is somewhat of a constant through the rest of the years of the relationship.  As soon as a man gets a whiff of a permanent negative change of personality, he will run.  Also, don’t wait until you are single again to keep fit.  A man wants to grow old with his lover, not grow big with them.  Appearance upkeep is just as important as mental upkeep.  Give your man small doses of your crazy, not the entire pharmacy.  When a man feels like his woman is stable, he will feel like his home is stable, which will make him more likely to stick around.

Not all women are fit to be mothers (yeah I said it).  Men, when looking for a serious relationship, will judge a woman on how well they would perform as the mother of their children.  If you are a selfish bitch, then be prepared to be dumped when a man decides to start a family.  Fundamentally, a man wants to marry a woman who he feels he can leave alone with his kids and who will instill morals and virtues that reflect his own.  Although that whole “I am an entitled selfish bitch” mentality might reflect some values of some men, most good men will walk away from a relationship they feel will not progress further, for the simple fact that there is always a younger, hotter selfish bitch he could put up with before he decides to get married.

Ultimately, stop declaring that you’re a goddess or that you should be pampered and revered if you don’t do the same for your man.  Men are simple (no offense).  They are won over with small gestures that show that you can give respect and give a man his place in your life and, eventually, your home.  Don’t nag a man.  And if you do, let him get home, relax his brain, eat some dinner, and then talk about whatever it is you wanted to talk about.  When you lay in bed for the night, don’t choose that time to discuss important topics that could be done earlier when he isn’t trying to relax or fall asleep.  Important topics will keep him awake while you snore away because you “got it out of your system.”  A little crazy is ok but let’s be real, too much crazy will drive a man away.  Be realistic.  If you want to be treated like a woman and a princess, that’s great.  But understand that it’s tit for tat.  For you to be traditionally taken care of means that you too will have to be a more traditional woman and do things for your man.  A choice has to be made between equality in the sexes and a more traditional role.  You can’t have it both ways.  If you expect a man to hold a door, pay for dinner, and walk you home, expect that one day, he will expect you to get him a beer, serve him dinner, and be a good woman for him.  If you want equality and independence, expect to go down with the ship just like a man would. Treat a man like the king of his castle and he will treat you like the queen that you claim to be…