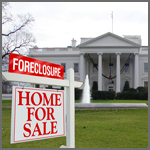 I will spare you my discourse on why our founding fathers came to America and established the parameters for what has been the most productive, successful country in the earth’s history but I will not spare you my opinion on how our citizens, some elected officials, and society have consistently violated those basic tenets our revolutionary fathers lived and died to establish.  This post is my first of a few politically-charged pieces that light a fire inside me.  The mortgage “crisis” is the first.

The lack of personal and business responsibility caused the mortgage/foreclosure crisis.  This “crisis” is only present because the parties responsible for obtaining the loans and those loaning the money were not held to account for their financial decisions.  The “invisible hand” of the free market  that Adam Smith wrote of in the Wealth of Nations will control financial decision-making.  I hold the mortgage-seekers almost solely responsible.  They applied for and agreed upon the terms of the loan.  They went to closing with an attorney and signed the contracts.  The bank is not and should not be under any obligation to do what is best for clients.  They are a company  that needs to look out for their own bottom line.  If a customer says they didn’t understand, were lied to, were misled, etc, then they should take that up with their attorney that they hired to explain to them the legalities and requirements of the loan.  Or better yet look in the mirror at the moron that didn’t pull out a calculator and figure out what your payments will be in 3 years after your variable rate adjusts.

Poor economic decisions’ consequences must fall at the feet of those agreeing parties.  There is no other solution, nor should there be.  If I’m the bank and I lend money to a shitbag that doesn’t pay, then I am out whatever the shitbag didn’t pay back on the loan.  I should put liens on everything he owns and be able to purge his accounts.   If the bank is out $1,000,000, $500,000, $200,000, $100,000, or only $50 because shitbag didn’t repay his loan, how many times do you think a bank would allow their loan officers to give loans like this to unqualified or risky applicants?  They would self-correct any lack of loaning standards as a capitalist company.  Our government is not allowing the invisible hand of the economy to set market rates, prices, keep productive companies in business and put bad companies out of business.

This financial crisis should have only belonged to the dumbasses that obtained mortgages they couldn’t afford and the moron banks that gave them loans.  I do not support government mandates on banks to ensure that checks on credit, employment, wealth, bank account balances, etc.  I support the bank making their own capitalist decision to either loan a guy money or not based on whatever they feel is necessary to make money.  If it is not good business to loan the money to that dude because they feel he many not pay it back, then the bank shouldn’t do it.  If it’s a good investment, then they should and will if they live in capitalist America.  I hate government intervention.  I hate communism.  I hate socialism.  By buying out these toxic bank assets we are effectively burning taxpayer money and, much worse, allowing and essentially promoting the non-acceptance of responsibility.

Our country wasn’t built on asking hand-outs, bail-outs, feeling sorry for oneself.  These are signs and symptoms of a mediocre (at best) society.  This country was built by those that pulled themselves up by their bootstraps; by those who left everything they’ve ever known in a boat for a land they had only heard about; by those who fought to put democratically elected officials in charge and not themselves.  When, in the history of this world, have people fought not for themselves specifically, but for the generations of their descendants to come?  There is a reason that we have the most productive, successful, highest achieving country in the history of the world.  The reason is that we are free, are capitalists, and are (small “D”) democratic.

I have never been afraid of the direction of our country until October/November of 2008.  This has nothing to do with who holds the Office of the President or the which political party is in office.  This has to do with decisions made by those in power.  We first bailed out financial institutions, then insurance companies, and then, worst of all, car companies.  These egregious mistakes are not insurmountable as far as correcting them, but are much more dangerous as a set precedent providing a slippery slope for future non-capitalistic, un-American decisions.

“If there ever existed a monarchy as strong as granite, it would only take the ideas of the economists to reduce it to powder.”   -Napoleon I, 1816