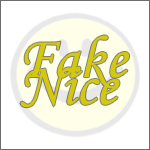 I love me some fake nice.  You gotta love it when people suck your ass.  There isn’t a better feeling than seeing someone who hates you, approaching them, and having them spew a whole bunch of flattery your way.  The following is a transcript of a conversation overheard at a NYC bar.  The dialect read in both paragraphs should resemble a cross between Legally Blonde, Clueless, Gossip Girls, and Bruno, so you can experience the full effect of what I witnessed.

Heeeyyyy, how are you? Omg, long time no see, how are youuuu? Good, good, just hanging out with friends, what about you? I am here with some co-workerrrrs. Cool, you look really pretty, I love your hair, that dress is hot! Omg thank you, you look pretty too, your top is very awesome. Thanks, I got it at fashion discount store. Really? That is awesome. So, are you dating anyone? Oh, no one now, just living single life. Awesome, well it was nice seeing you, stay in touch. Omg it was great seeing you too, call me if you want to have dinner!

Omg I hate that stupid slut. Seriously, that dress looked horrid on her, she must have gained 20 lbs. I think she is dating that one guy Steve, but she is here with another guy I don’t know. Omg, what a slut. I hope she drops dead. She is such a snobby whore. Uggghhhh!

There are many reasons to resort to alternate truths when responding to people; habit, indifference, vengeance, simplicity, manipulation, and escape.  We experience “Fake Nice” everyday.  When we ask friends, acquaintances, and strangers, “how they are doing,” the normal response is usually something along the lines of “Great, How are you doing,” even though it could be the worst day of their lives.  Over the years, greetings have evolved from announcement of oneself, to questioning the other person, which has dissolved the overall purpose of the greeting by shifting the focus of the initial introduction.  There are even cases which “Fake Nice” goes as far as settling for an introductory question like “How are you?” and leaving the scene without an answer.  This sociological interaction is more of a programmed response than deep rooted “Fake Nice,” but in a world of negativity and selfishness, daily occurrences of such instances play a role in assembling our overall compassion standard.  Sucking up to a boss, to an ex-fling, to a client, to a judge, are all examples of how “Fake Nice” can provoke positive outcomes.  However, there is one instance of “Fake Nice” that baffles my mind as to why people engage in it; being “Fake Nice” to people you hate or dislike.

Being “Fake Nice” to someone you dislike makes just as much sense as being “Fake Mean” to someone you like.  I have seen it time and time again, girls talking badly about the girl who just left, but while that girl was present, it was like everyone was best friends.  If “She is such a bitch,” then why associate with her?  Next time you open your mouth to comment on someone’s hair, dress, or shoes make sure you speak the truth especially if you abhor them.  It serves you no purpose looking weak by sucking up to a person who you have affliction towards.  Besides, cat fights are more fun to overhear and/or watch, than two girls bombarding each other with fake-ass adulations.  Life is too short to let people walk all over you. Let them have the truth, no matter how violent or unpleasant the outcome, because now,  people around you don’t think you are pathetic.  Stop the perpetual regret of “Fake Nice” situations and dominate someone verbally to convey how you really feel.