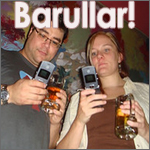 If you were born in 1985 or before, you may still remember a world where people found it fun and fascinating to mingle with other people who share the same time and space as each other. In high school I remember plans were forged through hallway conversations, nighttime phone dialogues and paper flyers. When someone invited you to eat, to a party, to a movie, to a sporting event and you accepted verbally, unless there was some serious emergency, you showed up because there was no way to get a hold of the person who invited you to let them know you weren’t showing up. Technology has made us fickle, has destroyed our oaths and bonds and has made it acceptable to demur without hesitation. This article isn’t about the frailty of human fellowship due to technology, rather I am writing this piece to point out a serious problem that has yet to be acknowledged in social gatherings, Cellular Light Illumination Technology Syndrome or C.L.I.T.S for short.

About a week ago, some friends and I decided to go out drinking. We chose to start the night at 675 Bar in NYC’s meatpacking district. This bar is underground, so it is very dark, but a very cool place to begin the night. While sharing a drink with friends I took a step back and noticed something about everyone who was in the bar. Everyone happened to be talking or texting on their cell phones. Hundreds of tiny LCD screens lit up the bar taking away from the ambiance, fingers mashing away at tiny screens and keyboards, heads tilted in a downward position almost giving the word zombie truth of its existence.  When I go out with friends, I have one rule; once I get to an establishment with “Real” people that share the same “Real” space as me, I do not touch my cell phone. All attempts to contact me during this time fall victim to my voice mail and/or my text inbox. There is no news important enough at 1am that should take me away from the friends around me. Hundreds of people avoiding human contact, avoiding chances of fate because they want to communicate with someone who doesn’t care enough to spend “Real” time with them, I don’t get. You are in a place with so many different and beautiful people, why not talk to them? The answer surly cannot be that people of this day lack the courage, the charm, the properness to engage in human vs. human conversation. Surly the age of instant messaging, texting, and the Internet hasn’t taken away from society’s interaction capabilities. I will give my fellow men and women the benefit of doubt on this one and place blame on the very devices we are using to ignore others around us, C.L.I.T.S.

Cure(s):  Church, parental beatings, move to a dead cellular zone, realization that people who matter are around you, not in a phone, dead cellular battery, lost phone, gout of the  hand.

It is a sad day when the majority of the public have C.L.I.T.S. Walking into a bar with C.L.I.T.S everywhere is a sign that society, even in its most primal of establishments, cannot connect itself to reality. Although we can’t totally exclude C.L.I.T.S from our lives, embracing C.L.I.T.S will only lead to further degeneration of our youth and the rest of the technosexuals of our world. C.L.I.T.S can be controlled by arousing the person with other stimuli, like discussing news topics, sporting events, fashion trends, etc. With proper help, the urge to reach into your pant pocket can be lessened to a degree of tolerability if people would only play with their devices at home, instead of in public. Public display of C.L.I.T.S is not only embarrassing, but rude as well. C.L.I.T.S can be treated with doses of love and affection from people who care about you and from people who are with you in real time. The next time you and your friends have the desire to check email, text or call while around people in a public place, remember that you might be perceived as having C.L.I.T.S.