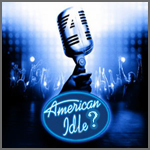 I enjoy two stages of American Idol; the start of the season when the show travels from city to city searching for contestants and the final four culmination. American Idol has had great success here in America. It has unveiled talent who have won Oscars, Grammy’s and other prestigious awards. It has devised the careers of Carrie Underwood, Kelly Clarkson and David Cook just to name a few and every year the judging from the panel and the votes from the people seem to be right on. Except this year.

When there is incredulity in candor for competition, the end accolade’s renown will be tarnished. You can argue that “Winning” American Idol is really “Losing” for your career, especially if you are recognizably great at singing and last long enough to get exposure for your talent, but in a competition, the best should always win. This year there was one contestant who, for the first time, gave me chills while listening to his singing. Of course there were at least five contestants who were brilliant singers, but this particular contestant was not only a great singer, but also a great performer who displayed a wide variety of songs and styles. The problem I have with Kris Allen’s victory over Adam Lambert doesn’t arise from which of the two have the better voice, it emerges from people voting based on what/who these two individuals represent; Kris delineating a straight male heartthrob and Adam symbolizing a edgy homosexual.

It agitates me that people in this world would go out of their way to vote against someone’s talent because of their personal agenda. As a former athlete, who/what someone represents means nothing in tribute to their talent or ability. It was rumored toward the end of this year’s competition that religious groups rallied together to vote against Adam Lambert because of his sexual orientation. Now, I am sure that Kris Allen probably won due to the millions of young disillusioned 10-25 year old girls blindly voting for him based on his looks rather than a bunch of church groups rallying against Adam Lambert, but just if there was a chance Adam Lambert lost due to these partial groups, it would be a sad day for America.

I am no Bruce Dickinson, but I did listen to all the performances of the top four contestants before I wrote this article and there is absolutely no comparison between Adam Lambert and the other three. It is as if Axel Rose, Bon Jovi and various lead singers from awesome alternative bands donated their DNA to create Adam Lambert. The prominent reason I flip the channel from American Idol has to do with a contestant singing a slow song with no energy, which happens to be 80% of the time during the competition. Adam Lambert had the best voice, best scream, best high note, best stage presence, best passion yet he lost to a mediocre singer with good looks. If there were anyone more opposite to Adam Lambert, it would be me, but I recognize his talent outside of who/what he represents. When you vote for someone in a competition, your vote should represent the truth of what the competition is trying to discover and in American Idol’s case, it is vocal performance.

Adam Lambert will have a great singing career and Kris Allen will be a great Idol winner, but America will not recover from this. Whether the vote was superficial toward Kris Allen’s looks or prejudice against Adam Lambert sexual orientation, American Idol is now idle. Sure the outcome is over shadowed by money, power and the anticipation of season nine, but if  America can’t vote based on talent and ability, the show is nothing more than a reconstructed “Quiz Show” with a democratic voting system, which we know through examples of political elections, is a medium of power which can’t be trusted to the masses.